Hi! I’m Nele (“nay-la”) and welcome to my website! Add my love for travel, storytelling and photography to my slight coffee addiction and you get yourself The Navigatio.

I’m a bit of a serial city tripper. Even though I grew up going on many adventurous trips (hiking in Switzerland, canoeing in France and skiing in Austria), cities stole my heart as soon as I decided where to go on holiday with my boyfriend Richard. We love the excitement of new cultures, the history and stories these cities can tell us and… it’s usually a lot more affordable and easier to plan in a city break compared to a 2-week holiday!

Having been to 23 countries and over 100 cities, I have my fair bit of travel planning experience and I know the issues all too well. You want to make the most of your short time there and you don’t want to miss out on any cool hidden gems! My guides help you make the most of your city trips, recommend only the best hotels and give you all the information you need to make your next trip unforgettable!

We LOVE city breaks! Europe has so many amazing cities to explore, filled with history, culture and stories to discover. Because city trips often only last a few days, it’s more affordable and act as the perfect break from everyday life.

You can expect to find detailed itineraries, hotel guides and the best things to do in each destination on The Navigatio. Our in-dept guides will fully prepare you for your next city break, taking away any travel anxiety you may have.

Apart from loving European cities, Japan is the destination that stole my heart. The culture, the food, the ancient temples and the exciting cities. From city guides and full Japan itineraries to general Japan tips and budget guides – find them here.

Born and raised in the Netherlands, Nele (pronounced as Nay-la – hello Dutch spelling!)

At 18, she dropped out of her Communications degree in Tilburg (Netherlands), to take the leap and move to the UK. Once arrived in Manchester, she followed an Access to HE course to then enrol into the English and Creative Writing degree at Manchester Metropolitan University. During the second year of her degree, she launched The Navigatio to secure a little place on the internet where she could write stuff that wasn’t part of her course.

While working multiple part-time jobs on the side of finishing a degree in her second language and having some sort of social life, Nele managed to save up enough money to make one of her biggest travel dreams come true: Japan.

After returning from Japan, her blogging experience landed her a full-time job as a digital marketing assistant and SEO specialist. After 6 months of working at the company, she quit to pursue her dreams of running The Navigatio full-time.

The Navigatio has been featured on… 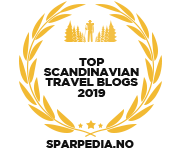